The Amazing Discovery of Mason and Dixon’s Transit Instrument

To whet your appetite for Philadelphia at NSPECon 2022!, we offer an amazing Webinar by engineer and surveyor, David S Thaler. He  tells the saga of the Mason Dixon survey, the most outstanding engineering and scientific achievement of the 18th century  which resolved the bitter 80 year feud between the Penns of Pennsylvania and the Calverts of Maryland and was the longest running case in British judicial history. It all began right here in Philadelphia,

He also tells the story of the remarkable discovery of Mason and Dixon’s actual Transit, perhaps  Americas most historic scientific instrument and its donation as a Gift to the Nation from the Engineers and Surveyors of America,  The instrument now fully restored, resides at Independence Hall but a short walk from the convention venue

You don’t want to miss this thrilling adventure, a tale right out of a National Treasure movie.

To register, add this webinar to your shopping cart and check-out in the NSPE e-store. 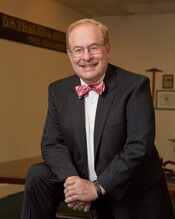 Is the Managing Principal of D.S. Thaler & Assoc., LLC; a civil and environmental engineering firm that he founded in 1976. In 2019, he won the NSPE  Award  the highest award given by NSPE to an individual.

David is involved with projects of extraordinary complexity and his firm has designed more than 4,000  land development assignments throughout the Mid-Atlantic region. The firm has extensive experience with large, difficult, and environmentally complex projects and has created many innovative designs. For instance, David invented “Super Silt Fence,” a technique that is now an international standard.

David is a Fellow of the National Society of Professional Engineers, the American Society of Civil Engineers and the Royal Geographical Society in London. He is a  Board  certified Diplomate of both the National Academy of Forensic Engineers and the American Academy of Water Resources Engineering. He has been honored numerous times by many organizations, has received several Lifetime Achievement awards, and holds Maryland’s highest military honor, the Distinguished Service Cross.
Extremely active in professional affairs, Thaler has served on the Board of Directors of the Maryland Society of Professional Engineers for over 30 years, including as President. He was the founding president of the Land Development Council of Maryland, Chair of the Baltimore County Chamber of Commerce and is an active member of numerous professional and technical societies.

Thaler has been a highly visible and vocal advocate for well-engineered and designed communities and has been a tireless voice of the engineering profession. A polymath, he has published more than 250 articles and five books on a wide variety of subjects including one with Professor Larry Gibson, biographer of Thurgood Marshall, on whether the journalist, H L Mencken was a racist or Antisemite.
David  has lectured at more than a dozen colleges and universities. Including the University of Maryland School of Architecture,  Johns Hopkins , and the University of Baltimore School of Law where he was Visiting Scholar.

Internationally, Thaler participated in the Rule of Law Project in 2000 in St. Petersburg, Russia where he lectured on documenting and transferring real property at the Northwest Cadastral Land Institute of the Leningrad Oblast.

David also identified the original instrument used by Charles Mason and Jeremiah Dixon in their iconic survey of 1762-1767, proved its provenance, raised the funds for its restoration and organized an event where he ceremonially presented the restored instrument to the National Park Service as a “Gift to the Nation” from the engineers and surveyors of America.

He is also an accomplished bagpiper and for many years served as the Pipe Major of the Baltimore Police Department Ceremonial Unit where he performed at civic events and the funerals of many police, firefighters, and servicemembers killed in action including at Arlington National Cemetery.